We Are On The Rise!

We Are Blogging and Blogging Ain't Bragging. 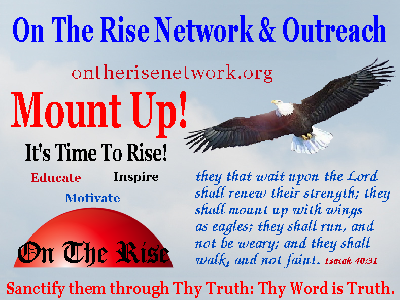 On The Rise Network and Outreach

While stationed at Fort Gordon, GA. Jamie Eatmon Co-founder of On The Rise Network and Outreach met Ondrea of Augusta, Georgia. The meeting was the kindling that fueled The Rise Newspaper into existence. The Rise Newspaper was the answer to the inquiry of what could be done to make a difference in the lives of our black youth to counter some of the negativity in the world. The proposed answer was a newspaper that would feature the positive aspects of life in hope of motivating and inspiring its readers. The Rise Newspaper was founded in 1996, its mantra was “When you are on The Rise, nothing can hold you back.”

In 2002 due to unforeseen situations and circumstances the last issue of The Rise was printed. Years passed and the only mention of The Rise came in the form of a question, what happened to The Rise? I would be years later before the answer to that question would fully manifest. The manifestation came in the form of On The Rise Network and Outreach, Co-founded by visionary Jamie Eatmon and Lady Antoinette P. Eatmon.

Let There Be Light

We Are On The Rise

The Great Poets said it best:

Life aint been no crystal stairs, Still I Rise and I'se a still climbin'

The Rise is not a new thing, but an old mindset.  Martin said it best, "Truth Cru -shed to earth will Rise again"  and in another quote he stated, "The arc of the moral universe is long, but it bends towards justice."

The Rise’s history has yet to fully unfold, therefore, for now, it is time to live out the half that has yet to be told.  Our past has taught us patience, through our patience we have gain experience and presently, it is the testimonies of our past